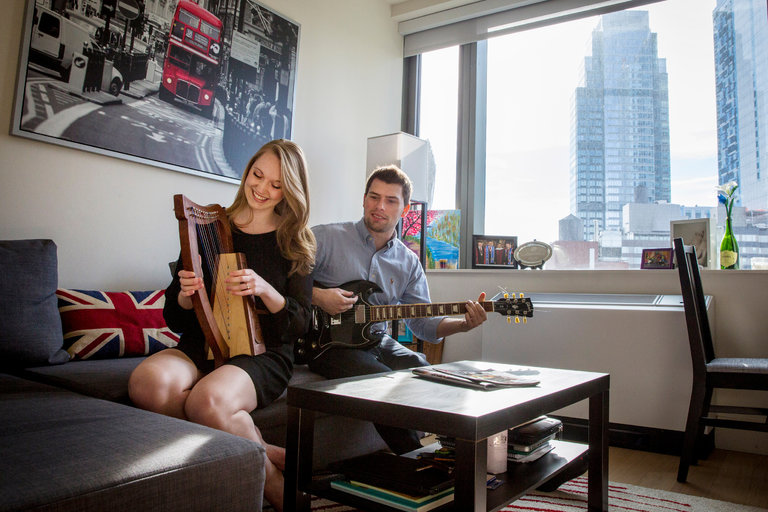 THE RENTERS Emily Scheele and Jerod Coker play music together at their apartment in Downtown Brooklyn. CreditNicole Craine for The New York Times

So when the couple began hunting for an apartment online from the Denver suburbs, where they were temporarily staying with Ms. Scheele’s parents, they had no idea what they were in for. “We’ve always ever rented apartments in a college town,” Mr. Coker said. “We knew the pricing was going to be insane, and we naïvely thought our budget would be $2,000 or $2,500, max.”

That monthly amount was “fairly arbitrary,” he said. “It wasn’t based on market intelligence.” The going rent for a room in Norman, Okla., where they had both gone to the University of Oklahoma, had been around $350 a month, and the idea of paying “six times the rent was brutal,” he said.

The couple had met at the university when Mr. Coker, now 25, was a senior and Ms. Scheele, 22, a freshman. Now, after two years of graduate school in England, Mr. Coker had taken a job as a management consultant based in Midtown Manhattan.

On StreetEasy, they saw reasonable-looking one-bedrooms for rent in their price range, though they didn’t initially realize how far those were from Midtown. They Googled phrases like “top places for young professionals to live in New York,” and found no overlap. 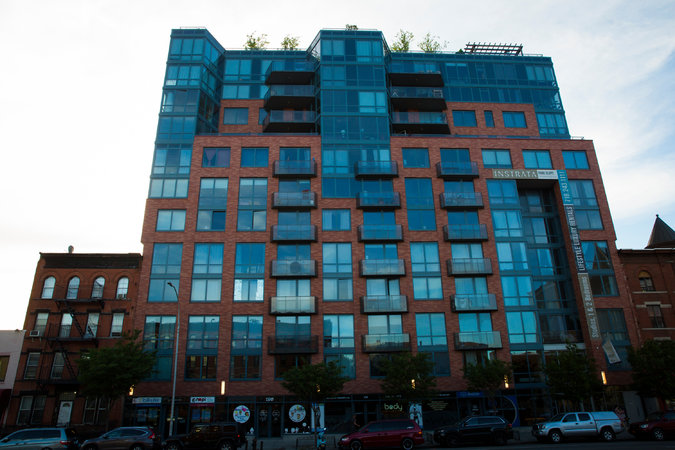 BROOKLYN An alcove studio at the Instrata on Fourth Avenue seemed too small to the prospective renters.CreditNicole Craine for The New York Times

“It would have driven us insane to not draw some boundaries, even if arbitrary,” Mr. Coker said. They already knew Manhattan was too expensive. Preferring a high-rise, they narrowed their territory to Long Island City and Brooklyn.

Ms. Scheele, who now works in Manhattan at Organize, which encourages organ donation, wanted a location where frequent activities, like shopping and gym visits, “didn’t require a lot of travel time.”

Arriving at the start of the year with seven suitcases, they stayed with a cousin of Mr. Coker’s in New Jersey, about two hours from New York.

They began their hunt in Long Island City. They visited several rental buildings along the waterfront, unpleasantly surprised to find one-bedrooms cost more than $3,000 a month. And, Mr. Coker said, they thought “we should do the Brooklyn brownstone prewar history thing and look at a walk-up.”

So they saw a one-bedroom, for $2,400 a month, in a renovated building, circa 1928, on Eastern Parkway in Crown Heights. It was nice enough inside.

But then, Ms. Scheele said, “the roof of my mouth started itching.”

“A lot of old buildings are rife with mold and fungus,” she said. “I am very sensitive to mold in the walls.” 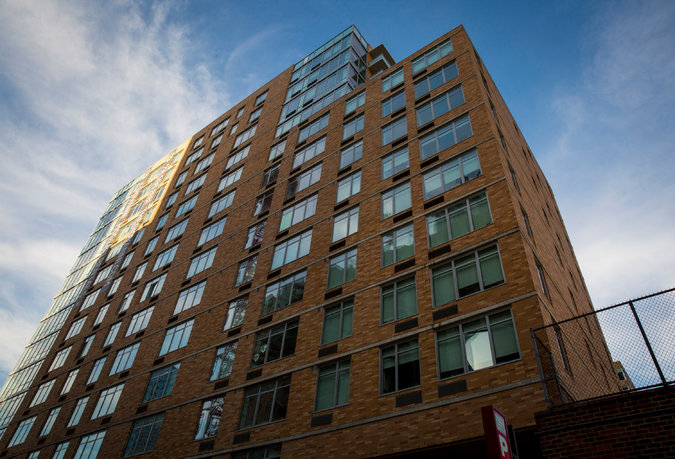 BROOKLYN The Giovanni, a new 15-story rental building with many amenities in Fort Greene, was a contender.CreditNicole Craine for The New York Times

They moved on to the Instrata, opened about 2010, on traffic-laden Fourth Avenue on the edge of Park Slope and Gowanus. An alcove studio was going for $2,500 a month. But with a queen bed in place in the alcove, they feared the closet wouldn’t open all the way.

“There was a common area, but there were quite a few children, which is fine,” Ms. Scheele said. “But it was not really a relaxing reading room.”

They headed for the new construction in and around Downtown Brooklyn and connected with Zuriel Haskins, a salesman at Area New York, whom they had found via nakedapartments.com.

“Until we talked to Zuriel, we hadn’t factored in the train thing,” Mr. Coker said. “We made a spreadsheet — because I’m a consultant and that’s what I do — of places we thought we would want to go to fairly regularly, and Brooklyn was always accessible because of so many trains.”

Mr. Haskins told them a studio would cost in the high $2,000 range; one-bedrooms would be more.

They liked the Giovanni, a 15-story rental building on Fleet Place in Fort Greene, opened last fall. That one was slightly farther from the train than the 48-story City Tower, an even newer rental building at City Point, a large development in Downtown Brooklyn. Rentals there start on the 20th floor, with retail space downstairs. They liked it, too. 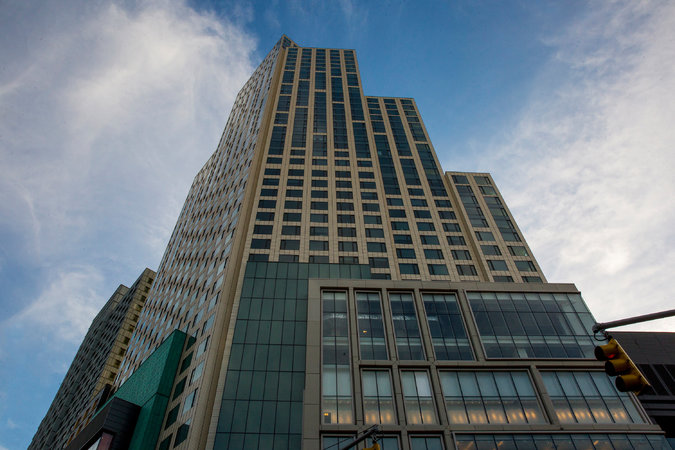 BROOKLYN In the end, it was City Tower by a nose. Its advantages were a walk-in closet and an immediate move-in date. CreditNicole Craine for The New York Times

Mr. Haskins urged them to take a one-bedroom over a studio. “I said, ‘You might want to be in different rooms once in a while.’ I’ve never seen a couple not have an argument.”

They chose a one-bedroom with a 19-month lease, which included one month free. The lease will expire about the time Ms. Scheele plans to start medical school. (She is now applying.)

Their rent is $3,150 a month — nine times their Oklahoma benchmark. “We have been told by so many people we are not paying so much, but it is hard to believe,” Mr. Coker said.

They moved in exactly one week after they started the hunt, among the first renters to arrive, and furnished the place out of Ikea, with an assist from Target.

They were excited when neighbors started appearing. “Now we see puppies in the elevator, and that makes my entire day,” Ms. Scheele said. She can take the F train to work, “but I choose to take the Q because it goes over the bridge and I love the view,” she said.

The biggest downside is the combination microwave-convection oven. Her new cookie sheet didn’t fit. A frozen pizza heats unevenly. “I’ve heard that frozen pizzas are not standard in New York, and people just order a pizza,” Ms. Scheele said. “We would cook a lot if it weren’t for the oven. We eat out more than we would like.”

The building is still not finished. The stores beneath, not yet open, will include Target, Trader Joe’s and Century 21. “Target is hiring,” Ms. Scheele said. “I am very much looking forward to riding the elevator down to the grocery store and back up, instead of carrying my groceries on the subway and on the street.”